The nominations for the BritMums Brilliance in Blogging (BiBs) awards opened earlier in the week – the BiBs is one of the biggest events of the blogging calendar and recognises the most creative, inventing and compelling bloggers of the year. Since nominations opened, I’ve sort of been in a dilemma (OK, maybe more of a fleeting thought) about whether I want to channel my Frank Underwood and jump onto the campaign trail by putting myself forward to be nominated.

Tonight, after a bit of consideration, I’ve decided to throw my proverbial hat into the ring and tentatively put myself forward for three of the categories – ‘Fresh Voice’, ‘Writer’ and ‘Family’. Not for one minute do I consider myself to be the best newbie, best writer or best family writer in the blogging world, but I’d like to think that my musings have been enjoyed by at least one person other than my mum.

If that is the case, I’d ‘love it’ (said in your best Kevin Keegan voice) if you’d consider sticking my name down as a nomination for one / all of these categories please. To nominate without reading any of the other stuff I’ve written to try and persuade you, click one of the badges below, scroll to the bottom, click on the nominate button and fill in the details… 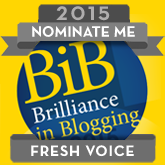 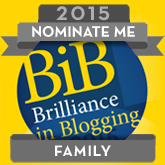 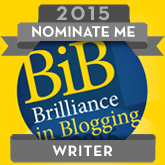 …however, if you’re not ready to nominate just yet and need a bit more persuasion, then read on.

I’ve only been blogging for 10 months, but feel like I’ve done a decent job during this time with my musings about fatherhood. I don’t want to sound like a big-headed dick (which I probably will do), but I’ve built up an awesome audience (yes, that’s you!) both here and on social media, been nominated for two Love All Dads Awards, climbed to No. 258 on the Tots 100 chart of over 8,000 parent bloggers, had the unexpected opportunity to work with some fantastic brands and, most importantly for me, entertained a few people along the way with my often random thoughts about being a dad to Baby L and husband to Hay. See, that wasn’t too dickish, was it?

I’ve not seen the BiBs in action before – however, I’ve seen some of my favourite blogs with a BiBs badge on their site which has made me want to get in on the action. You know, a bit like when all of your mates have got off with a girl but you’re still waiting, with only your right hand for company. Or was that just me? So, it would be awesome to help me get to 3rd base by nominating me for a BiB.

The winners are awarded at BritMums Live on 19th June 2015, but before then, there is a nomination, shortlisting and voting process to go through. The first stage is to nominate your favourite blogs in any of the twelve categories on offer, with nominations closing on 12th April. Having looked at the categories and struggled a bit to find where I fit in, I’ve decided that the ‘Fresh Voice’ and / or ‘Writer’ categories probably are most suitable – mainly because I ruled myself out from categories such as ‘Inspire’, ‘Photo’, ‘Video’ and ‘Travel’. So, for the second time, you now have the opportunity to click below and vote for my blog via the nominate button…

If you’re still not sure, then I don’t really blame you. There are some fantastic blogs out there which are probably more deserving of a nomination than I am, particularly as I’ve had the cheek to put myself forward for three categories. However, the one thing I have over them is nude photos of Tom Hardy, Ryan Reynolds, Beyonce and Jessica Alba* which I’m willing to trade for votes. Now who wouldn’t want to see Mr Reynolds laying naked on a bed with his come-to-bed eyes or Beyonce being all bootylicious without clothes?

* Note: The promise of nude photos may be fictitious.

In order to nominate, you need to stick down some info in this nomination form. Assuming that you’re still reading this and want to vote for me, the details you need are below:

Why do you feel this blogger deserves to win: Enter a reason – you may want to consider words such as awesome, cool, sexy, funny, well hung etc

Some well placed suggestions of some of the blog posts which seem to have gone down well are below:

Hahahahahahaha, some of those posts had me in stitches. If you enjoyed re-living any of those, then pretty please click below, go to the nomination form and stick in my details. Thanks loads in advance. Much love.

[jetpack_subscription_form subscribe_text=”Like what you’ve read? Then join The DADventurer mailing list to ensure that you never miss a post. Just pop in your email address and you’ll get all the latest musings directly to your inbox.”]

First day back at school for this one and she's so

Bit of a weird Father's Day this year as it's the

We decided to go on a long adventure. I call it an

As today was World Environment Day, L wanted to do